Distribution of Dividend by Domestic Company as per Companies Act 2013 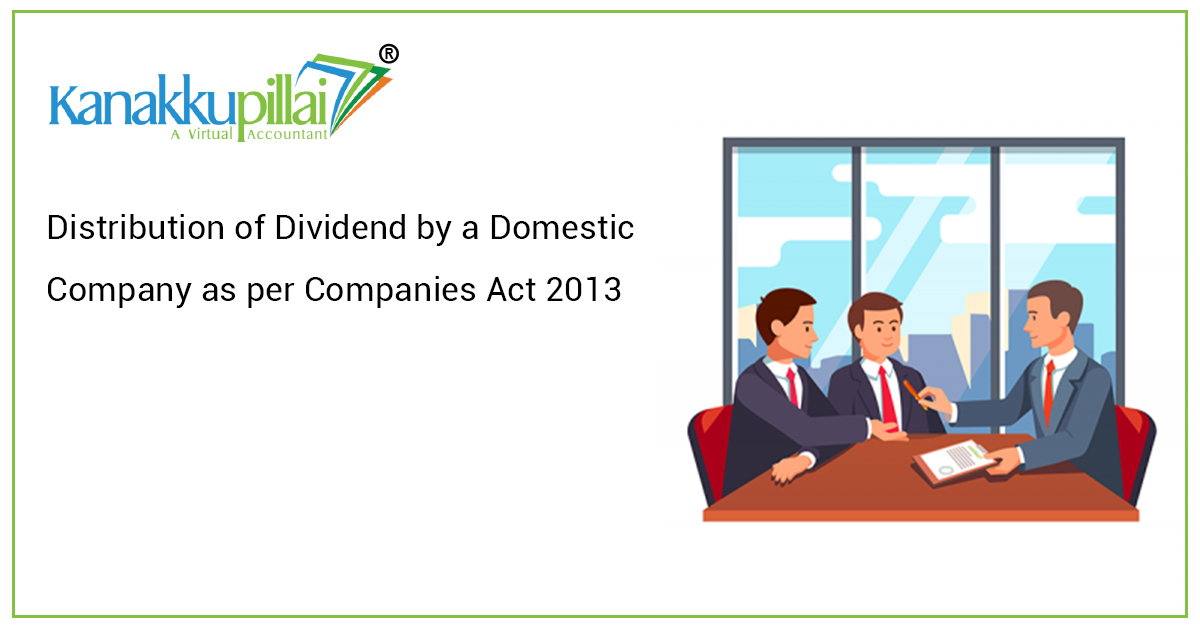 Dividend can be defined as the sum of money which is paid by a company to its shareholders, out of the profits which are earned or made by the company utilizing the shareholder’s funds or investment in the same. The company would declare and pay the dividend to its shareholders based on the number of shares which are held by each of them and should be authorized by the Articles of Association (AOA).

As per the Companies Act, we can say that there are three major sources from which the dividend will be paid by a company and this includes:

A company can declare and pay such dividends only in the form of cash and not in any other form. The same can be paid in the form of a cheque, warrant, or other electronic mode to the shareholders who are entitled to receive the same.

It is to be noted that in the case of a company that has defaulted compliance to sections 73 and 74 of Companies Act, cannot declare a dividend and would be barred from doing such act. Section 73 and 74 of the Companies Act is dealing with the acceptance and repayment of deposits.

What is an Interim Dividend?

A company may declare dividends out of the profits earned during the year or the accumulated or undistributed profits of the company during the interim period of a financial year or any time during the period between the closure of the financial year and holding of the annual general meeting.

Procedure for Declaring and Paying Dividend

While Listed Companies are required to inform the Stock Exchanges on which their shares are listed, the progress of closing of its Register of Members for the payment of the dividend declared during the annual general meeting for the determination of names of shareholders entitled to the dividend.

And then, within a period of 90 days, a statement containing,

is required to be prepared and to be placed on the website of the company, if any, and any other website as approved by the Central Government.

In case the company has committed any default in transferring the amount, to the Unpaid Dividend Account, then the company shall be held liable to pay interest at rate of 12% p.a. from the date of commitment of such default. And if such unpaid or unclaimed amount lies as such for 7 consecutive years or more then the company shall transfer the same to the Investor Education and Protection Fund.

Penalty for Non-Payment of Declared Dividend

If a dividend declared by a company has not been paid within 30 days from the date of declaration, to any shareholder, then;

There are certain exceptions to this case and this shall not be deemed to have been committed:

– The dividend could not be paid due to the enforcing of any law;

– A shareholder of the company has given special and particular directions to the company regarding the payment of the dividend. And these directions cannot be complied with by the company, which has been duly communicated to him;

– There is a dispute existing regarding the right to receive the dividend;

– The dividend has been lawfully adjusted by the company against any sum which the shareholder holds as due to it;

– Such other reason, which caused the failure to pay the dividend or to post the warrant within the period under this section was not due to any default on the part of the company.

Who can Apply for MSME…

Who can apply for MSME registration - Eligibility criteria In this blog, let us examine…

GST Cess—Rate, Applicability, and Calculation In this article, we discuss the applicability of the goods…

About Form MSME in ROC…

About Form MSME in ROC with Filing Procedure MSME stands for Micro, Small, and Medium…

MSME Registration Certificate in India MSME stands for Micro, Small, and Medium Enterprises and is…

MSME GST Registration in India The full form of MSME is Micro, Small, and Medium…

How do I cancel MSME…

How do I cancel MSME registration? Registering MSME is mandatory for all types of business…

How Auditing Firms In Dubai…

How Auditing Firms In Dubai Help You With Your Auditing and Bookkeeping Activities? Auditing can…

OUTSOURCING YOUR SEO – HOW…

OUTSOURCING YOUR SEO – HOW TO FIND 3rd PARTY SEO HELP ? SEO is the…