Letter of Undertaking the Exemption from Taxes for Exporters 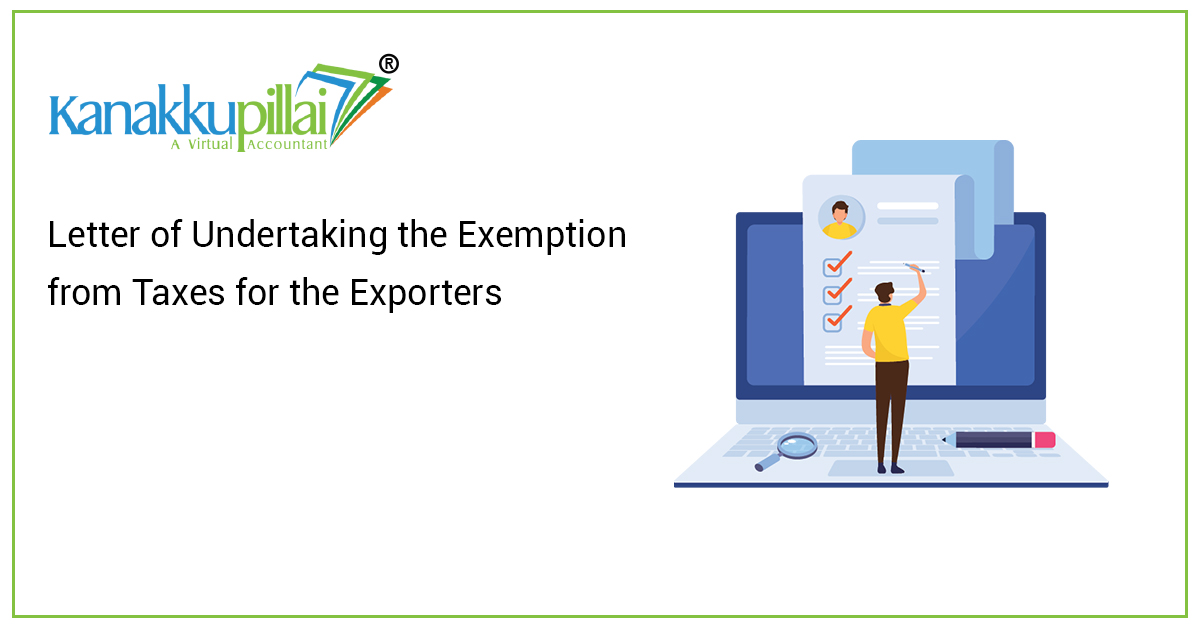 Business entities today are trying to venture their business, not just in the Indian markets or the markets within the country or on the national level, but also on a global level, crossing all the geographical boundaries. For supporting this and also aiding the same, the Government of India has come up with various schemes and benefits which would enhance the functionality and the area of expansion of the business. One of the major provisions which were introduced by the Government of India is the GST tax regime, which is a unified tax system implemented across the country. Along with this, there is a Letter of Undertaking arrangement also made available to the exporter’s convenience by the government. Under this, the exporters who are exporting the goods from India to another country can conduct the same without paying Integrated Goods and Service Tax or the IGST. The major point of discussion under this article is the LUT or, the letter of undertaking.

What is a Letter of Undertaking?

Letter of undertaking  is an arrangement provided by GST Authority of the country India to the exporter of goods from India to a foreign country. Under this, there are two options made available to the supplier or the exporter for exporting their goods and they are allowed to choose from these options for availing the exemption from taxes. This would include the following:

– Paying off the IGST or the integrated goods and service tax for the export of goods made by the entity or entrepreneur and then claiming the credit or refund of such taxes which are paid by them.

– Otherwise filling the LUT or letter of undertaking or bonds and get themselves exempted from the payment of IGST for the export of goods conducted by them.

Form GST RFD-11, Prescribed under Rule 96 A of GST Act. Shall be utilized for the furnishing of LUT or the letter of undertaking. This rule states that the exporter of the goods would be making the statement providing all the necessary details of the exports and without paying the IGST, but ultimately would be fulfilling or complying with all the requirements laid down under the GST rules and regulations or guidelines.

Eligibility to be held for Furnishing LUT

The persons who have taken registration under the GST Act or the GST law can submit and would be holding the eligibility for submitting the LUT or Letter of Undertaking. The exception shall only be applied to those taxpayers who have been summoned for tax evasion and the amount involved under this is exceeding the prescribed limit as per the rules laid down under the GST Rules. If a taxpayer or a person registered under GST is not allowed to submit the letter of undertaking or the LUT, then such person shall submit the export bonds for the export of the goods conducted by him.

LUT – Details to be Furnished

Under the letter of undertaking or LUT, the taxpayer or the person registered under GST have to furnish the following details:

– GSTIN or Goods and Service Tax Identification Number of the entity.

– The name of the entity is registered under the GST law.

– The document type is bond or the letter of undertaking/LUT.

– The address of the registered business premise of the entity.

– The date of furnishing the document.

– The signature and the designation which is held by the person signing the same.

– The details of the witness and a guarantee provided by the bank.

The validity of a LUT shall be for one year from the date on which it was furnished. Once the date of validity of LUT expires, the taxpayer needs to furnish the form again and it can be done using the GST portal on an instant basis.

The following are the list of documents that have to be submitted by the taxpayer along with the letter of undertaking:

– Acceptance cover letter of the letter of undertaking or LUT.

– The GST Registration Certificate is issued by the GST authority to the entity.

– The digital signature certificate is verified by the bank manager.

– The person or taxpayer’s PAN card details should be given.

– A self-declaration which is stating the eligibility of the taxpayer to provide LUT shall be given on the letterhead of the company or the entity as the case may be.

– The export sales invoices summary should be provided. It should be verified and certified by a qualified chartered accountant.

– The IEC code Certificate or License copy should also be provided.

For furnishing the LUT, an entity can access the portal of GST and do the same online. Following are the steps to be followed by the entity or the taxpayer.

iii. Now under the tab named ‘Services’, you have to select the ‘User Services’ tab.

vii. Now fill in the details with respect to the LUT on the form that is given on the screen.

viii. Ensure that the details of the witnesses furnished on the screen are similar to those which are mentioned on the statements on the bank guarantee.

DSC Verification method can be used only by the companies and the LLPs or Limited Liability Partnership entities. Instead of LUT, the exporters can also submit bonds, which again require a similar way or procedure for submitting the same. Under this 15% of the amount of total amount of the export, invoice should be given as a bank guarantee.

Court Marriage and Marriage Registration in India Marriage, often known as matrimony or wedlock, is…