10 Indians who succeeded against all odds 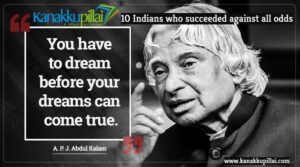 We, At Kanakkupillai Believe and Always Remember that  – “Success is not a Destiny, It’s a Journey”. Success Will never come Easily, Sometimes it takes Years, Some times months and sometimes also days. The Person Who never will leave the target until he reaches End only can see Results. Some time that Result only called “Success”, Maybe Sometimes that’s also called “Failure”, But That’s not Actual Failure, That’s a Stepping stone for “Success”.

Let’s Know About Top 10 Indians who succeeded against all odds,

Narayana Murthy, who is portrayed as the father of the Indian Information Sector and specified by Fortune Magazine among the twelve greatest entrepreneurs of this era, has not regularly been outstanding with his ventures. His early ventures, a business named Softronics, broke down in about a year and a fraction after its lead. After the defeat of his initial venture, Narayana Murthy joined Patni Computer Systems and worked effectively for about 5 years. He later founded Infosys in 1981 along with 6 software specialists and a meagre capital offered by his wife, Sudha Murthy. Infosys is now India’s 5th largest publicly traded firm and the 3rd largest Indian based Information Technology Services company.

Gautam Adani is the  Director and founder of Adani Group with gains in businesses such as coal trading, coal reserve, oil & gas analysis, harbours, multi-modal logistics, energy generation & transmission and gas delivery. Gautam Adani’s pathway to forming his empire, however, was not smooth as he experienced tremendous adversities early on in his life. At the age of just 18, Gautam Adani had to tumble out of Gujarat University while in his 2nd year of B.Com course and set to work as a Diamond sorter in Mumbai due to monetary conditions. However, the young Adani was not scrutinized by his early hardships and he rapidly set up a diamond trading firm and earned his first million by the age of 20. From that time, Adani continued on and in a tight stretch of time, has dominated to build one of India’s well know business companies, an $8 billion professionally managed super-strong empire.

Kiran Mazumdar Shaw, started Biocon in 1978 while she was just twenty-five sitting at a rented garage area with an investment of Rs.10,000. Starting a firm in an embryonic industry with minimum experience gave many challenges and hardships to Kiran Mazumdar-Shaw early on. She had trouble obtaining bank credit, calls for in enrolling the perfect talent and diverse problems to overcome. Mazumdar-Shaw overcame those adversities over the years and has now grown Biocon to be one of the leading Indian biopharmaceutical firms with stock in surplus of Rs.15.55 billion.

The founder of Air Deccan, Captain Gopinath, which revolutionized air travel in India hails from a modest family. Captain Gopinath’s parent was a school professor and he was the 2nd of eight kids. After completing his schooling, Gopinath was instructed with the Indian Army for a span of eight years. After evacuating from the armed forces, he turned into a farmer – set up a viable farm, opened an Enfield dealership and ran a Udipi hotel. After many ventures in his life, disappointments and disasters did Captain Gopinath finally start Deccan Aviation, a helicopter travel service – which slowly grew into the open pad for Air Deccan.

Sushil Kumar is a noted Indian World Champion wrestler who picked up the gold medal in the FILA 2010 World Wrestling Championships, white metal in the 2012 London Olympics & a bronze medal in the 2008 (Beijing Olympics). The eminent Indian wrestler hails from a moderate-middle class family and his dad was a DTC bus operator and his mom is a homemaker. Sushil Kumar was provoked to take on wrestling by his cousin Sandeep, who finally quit wrestling as their family could aid only one wrestler. Despite the minimum funds available, low training tools and scarcity of dietary supplements, Sushil Kumar has turned into a world-renowned Wrestling Champion through arduous work and pure persistence. Sushil Kumar is currently occupied with the Indian Railways as an Assistant Commercial Manager.

Dhirubhai Ambani, the very initial Indian to Entrepreneur to promote his business on the Forbes 500 list, was born to Dhirajlal Hirachand Ambani, in an intermediate funded family. His dad was a school faculty member and Ambani moved to Yemen at the age of just 16 and served there as a vapour-station attendant and as an agent in an oil firm. He came back to India in 1958 with Rs 50,000 and started up a clothes trading firm, which is now one of the greatest business companies in India with profit in many diverse zones.

Mahendra Singh Dhoni, one of the finest cricketers from India did not absolutely have a tremendous passion for cricket from his childhood. Dhoni started his sporting venture in badminton and soccer, at the region and union standard. It was while he was playing soccer as a goalkeeper, he was elected by his coach to participate as a wicket-keeper in the local cricket league. As he started wicket-keeping consistently for the local league, he whetted his cricketing skills and was commonly elected in league cricket. Dhoni hails from a small-middle class family and his dad Pan Singh was occupied at the junior grade at MECON. Therefore to uphold himself and his family, Dhoni took up the profession of a train ticket examiner (TTE) in the Indian Railways. Dhoni worked as a Railways Ticket Examiner between the years 2000 to 2003 and was elected for the Indian Cricket Team in the period 2004. Now, Mahendra Singh Dhoni is the senior cricketer of Indian Cricket Team in one day international and twenty-twenty format; officially he retired from test cricket, and his accomplishments as a wicket-keeper batsman are the best among all world cricketers to date.

Dr A. P. J. Abdul Kalam is an Indian physicist and the eleventh President of India from 2002 to 2007, has faced hopeless odds in his pathway to turning into the leader of a Nation- India. Dr Abdul Kalam was born in Rameshwaram, in a Tamil (Muslim) family; his dad Jainulabdeen was a sailboat owner and his mother Ashiamma was a homemaker. Dr Abdul Kalam brought up from an ordinary family and commenced to work at a premature age to strengthen his family’s revenue by distributing newspapers after school to contribute financially to his dad’s income. In his school days, he had normal grades but was a dedicated student with a passion for maths. Even during his old class project while in graduation stage, the Dean was disappointed with the lack of momentum and threatened to revoke his scholarship unless the project was accomplished within the next 3 days. He later worked day and night on his project and matched the time limit, swaying the Dean. From that time, Dr Kalam joined Aeronautical Development Establishment of Defense Research and Development Organization (DRDO) as an expert scientist and extended on to brain the organization. The other things are the history of India.

“In the period 2000, when the whole world was praising the modern century, I was proclaiming my adverse fortune. There were no photographs, no wealth, no business, a million legal claims against and the tax laws had given notice of recovery on my home,” – This is the quote by Amitabh Bachchan at the direction of the century indicates a vision into the hardships experienced by Amitabh Bachchan while he was in his late 50s. In 1999 Amitabh Bachchan was dealing with a new liquidity crisis as large funds were cut off in the production and distribution of his films. He was forced by the creditors and Amitabh Bachchan’s Company “Amitabh Bachchan Corporation Limited” was stated as a ‘sick’ firm. Amitabh’s partners and economic advisors cautioned him to close the sick company and run on; yet, Amitabh didn’t withdraw and kept travelling.

Now he recalls how he seemed to when there was a weapon dangling on top of his head at all the life and the number of nights spent sleepless. It was at this moment that Amitabh one morning woke up early and moved to Yash Chopra. He told him that he was insolvent,  had no movies and that his house was linked by creditors. Yash Chopra then offered him an appearance in his film Mohabattein. Amitabh also started making commercials and video programs. It was at this season that he received a massive breakthrough a television show Kaun Banega Crorepati; it pushed him into national popularity and aided in the turnaround of his fortunes.

Rajinikanth, a Kollywood actor, a cultural symbol and highly successful film star was born as Shivaji Rao Gaikwad in a ruined family. He lost his mom at the growing age of five and raised with 4 siblings, while his dad served as a police patrolman. On finishing his school education, Rajinikanth proceeded to go on numerous blue-collar jobs in the cities of Bangalore and Madras, consisting that of a coolie, woodworker and bus conductor. While functioning as a bus conductor, he took up an advertisement display commercial and enrolled in it with his colleagues’ economic support. During his course in acting, he was recognized by Tamil film director K. Balachander and the other things are history.

Super Star Rajinikanth’s was recently registered by NDTV’s among the 25 Greatest Global Living Indian Legends. His conversation after obtaining the honour is heart-stirring and a testimonial to his life, that has been nothing short of prodigious.

Rajinikanth’s conversation at NDTV award: “Many individuals don’t believe in wonders but surprises do happen. A simple bus conductor sharing the dais with the extremest living legends is a miracle. Miracles do happen anytime. I devote this award to my brother Sathyanarayana Rao Gaikwad who is like my dad and mom, my master Balachander and likewise families of Tamil Nadu, Without their love and passion I wouldn’t be here today”.

Rise of Women Entrepreneurs – on Willingness, Confidence and Hard work

Start-ups in India are booming unlike they were one in ten, a couple of decades …